Since 2005, the Addiopizzo Committee has been involved with schools in Palermo and province with the aim of spreading knowledge through courses about the extortion money “pizzo” phenomenon and about the concept “the critical consumer” il consumo critico that in which works as a tool for traders to fight against extortion money and as a tool for solidarity among the traders.

The first time we entered a school we were anonymous, and we had no idea about what would happen in the following years. But we already understood how important it was to get in touch with the students of our city. 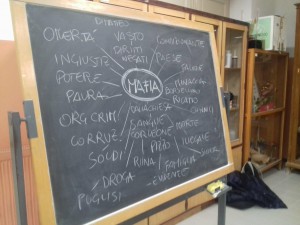 brainstorming with the students

The objective for Addiopizzo has always been to witness the path of anti-mafia from below and to give children and young people a critical point of view of the reality that surrounds them and make them aware of the reality.

The strength of the various projects developed over the years (from the spot meetings “Palermo vista racket” and “fortini della legalità” to the parades of “strada della denuncia”) was the recall of everyone’s responsibility and the recall of the daily anti-mafia actions, such as the critical consumer campaign against the extortion money. They are all actions that are reaching everyone, even those who have not yet reached the age of majority and so to speak do not “count”. But from our point of view, the young people and children do count. They have the power to combat the Mafia and the mafia culture.

Every time we enter a classroom it feels like the first time when we are talking to our younger fellows. With the awareness that we all together are trying to rediscover the most precious thing we have while the Mafia is constantly trying to take it away from us. The confidence of creating an alternative exist, because “If everyone does something… we will be able to do a lot.”